Alice Jiang is an English student at Humboldt State University, with a focus in literary studies. One day, she would like to be an English professor, and maybe even teach at Humboldt. She looks forward to working on the magazine, especially aiding in looking through all the submissions and compiling a collection of outstanding art and literature to bring to print. In the past, she has worked on student-run newspapers and participated in essay contests. Outside of the world of literature, she enjoys drawing, cooking, and fawning over dogs.
Drew Ahlberg is a senior here at Humboldt State University and is working towards a BA in English:Writing Practices and a minor in Ethnic American Literature. They received their AA in English from Diablo Valley College in Pleasant Hill, California. In their spare time they enjoy playing video games, reading graphic novels, and going to local art events.  After they graduate from HSU they hope to pursue a Masters degree in Library and Information Science in the hopes of being an academic librarian.
Mary Lipiec is an English major in her second year at HSU after transferring from College of the Redwoods, where she studied under the tutelage of David Holper and had a poem published in their literary magazine, Seven Gill Shark Review, in Spring 2018. She enjoys writing fiction and screenplays, and she would love to get better at poetry (there’s no way she’s letting that one poem be a fluke), but essays for English classes have taken up much of her writing time lately. When she graduates in Spring 2020, she wants to become an author and filmmaker, and maybe, just maybe, finally get the hell out of Humboldt. 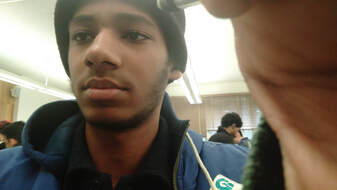 Tim Arceneaux is a senior student that attends Humboldt State University. The academic discipline that he has chosen to commit himself to is English with a concentration on literary studies, which is appropriate for someone taking a class about a literary magazine. There is not much else to say about Tim; few things truly make him distinct, as his habits and behaviors do not significantly differentiate him from the rest of his species, nor is his chemical composition dissimilar to other carbon-based lifeforms that inhabit Earth. However, because of his familiarity with the standards of writing classes and his sense of decorum, he recognizes the necessity to go beyond such banal generalities and convey some more of the detailed peculiarities that characterize his own ego construct or personality. Drawing from his experience with this kind of assignment, he is aware that inclusions about the ego’s preferences and enjoyments are typically viable options for conveying what his species considers to be personality. Therefore, the ego-construction that is called Tim will list some of his favorite preferences and enjoyments; they are: oxygenated air, food, water, sleep, being alive, sunlight, dry land, rain, shelter when there is too much rain, flowers, grass, trees, puppies, three-dimensional objects, Erykah Badu’s album New Amerykah Part II (Return of the Ankh), and the vacuum of space itself. These are all of Tim’s enjoyments that are worth mentioning; thus, you, reader, now understand him in his entirety and he can rest easy knowing that his assignment has been fulfilled. Additionally, he would prefer that this passage does not become uploaded to the university website, for he also recognizes that the sheer intensity of personality that is being expressed in this passage maybe too much for some readers.