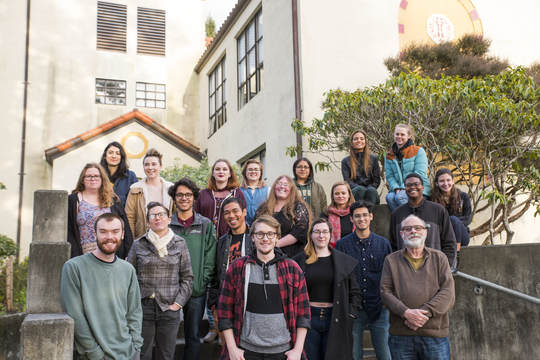 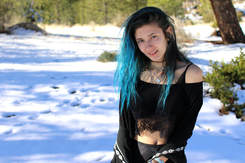 Audrey DiGenova is a junior at at Humboldt State University earning her Bachelor of Arts degree in English Writing Practices with a Philosophy Minor. When outdoors, she enjoys to swim in the closest body of water or get lost in the trees (pretty easy to do here). When at home, you can find her hanging out with her pet snake, Mr. Poe (named after the Poet Edgar Allan Poe) or kicking back with a book (not a nook or kindle or whatever those things are) and a glass of wine. She feels most at home where the sea meets the shore, present and past residence irrelevant. Audrey is the Circulation manager on the Toyon Outreach team of 2017, responsible for posting advertisements at local bookstores and local libraries about Toyon and circulating vol. 64 magazine in the spring. After earning her degree, she hopes to join the PeaceCorps, or find another way to be simultaneously less of a leech on society and more of a cultured traveler. Her favorite word artists include but are certainly not limited to Janet Fitch, r.h. Sin, Jeffrey Eugenides, etc.
Bryan Kashon is in his last semester at HSU. He will be graduating with a writing practices English major, and a performing arts Theatre Arts minor. He is one of the event planners of the Events, Development, and Fundraising team. When not sun-bathing on a rock to warm his reptilian blood, or trying to astral project to talk to the figures dancing in his peripherals, Bryan can be seen acting (on stage, and a fool), writing (unintelligible scribbles), and just enjoying things as they come. After he graduates, and sifts through the inevitable terror of post-graduation, Bryan hopes to become a creative writing teacher, or an acting coach, both to help fund his eventual dream of retiring at twenty-five (or becoming a self-employed writer; whichever comes first). Bryan welcomed his first beautiful, baby girl to our mortal realm this past December, and reassures everybody that while, yes, he is tired, his face has always looked like that. If the name strikes you as familiar, Mr. Kashon has acted in HSU’s Spring 2015 production of Slipping (as Eli), HSU’s Fall 2015 production of Jungalbook (as Bagheera), and HSU’s Fall 2016 production of columbinus (as Loner/Dylan Klebold). Among other things Bryan has helped create the semi-annual 24-Hour Play Festival here at HSU (open for anyone interested). He was published in last year’s edition of Toyon, and is very grateful to be a part of the production team this semester. Mr. Kashon is very grateful you are even reading this message. He thanks you, bows, accidentally knocks your beautiful vase off of the coffee table, freezes in embarrassment, and awkwardly makes his way out of the room. Follow him on any media platform under the guise: @lumberbuns
I am Harry Liddic, probably the oldest student at HSU and the baldest. I once was a stockbroker and I left that life of stress and responsibly to enter a new life of stress and responsibility. I am an English major in writing practices. I can’t write my way out of a wet paper sack but I am determined to learn how. For recreation I golf, paint with pastels, listen to music of the 60’s and 70’s, and read, read and read some more. I wrote one screenplay that got some attention but it was never greenlighted. I have met some interesting people particularly professors. The University is the perfect place to get your curiousity sated, better than even the internet. In the Information Age I am in the perfect spot.
Liliana Del Rio is an English major in the Writing Practices pathway at HSU. She is a transfer student from Los Angeles, CA. She is an avid reader who enjoys the fantasy and romance genres the best. On her downtime, she likes to write her own stories.
Megan Lombardo is one of the writers’ and artists’ liaisons for the 64th issue of Toyon Literary Magazine, is a senior pursuing her BA in English with an emphasis in writing practices. As of late, some of her favorite authors include Susan Steinberg, Kurt Vonnegut, and Don Delillo. Aside from reading prose, poetry, and fiction, some of her eclectic interests include discovering new music, painting, cooking, backpacking, hoarding succulents and fossils, and consuming copious amounts of coffee. Megan has an assortment of postgraduate aspirations to achieve, which include but are not limited to obtaining teaching credentials, a masters degree, and exploring more of this beautiful planet and all of its intricacies.