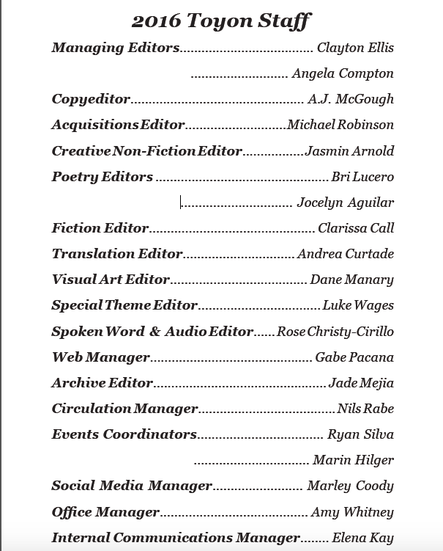 ​Taking the writing practices pathway at Humboldt State University, she hopes to eventually work as an editor in book publish and continue with her writing. With a passion for fiction, she is happy to be one of the fiction editors for the 2015 Toyon.

​A proud Scorpio from Norwalk, CA with roots tracing back to Guatemala, Andrea is a 4th year studying under the Writing Practices pathway. As the Toyon's Translator, she has interned at various production companies with roles that reigned from translating scripts to editing short infomercials. After graduating, she anticipates to be a script supervisor or video editor and work behind-the-scenes on film sets. Andrea is passionate about many things, but most importantly about being able to finish school and have an opportunity to work on a film set and see the magic behind how stories are told through film.

Elena originally wanted to be a nurse, but a combination of misfortune and a whole lot of luck made her realize her true passion - the written word. She enjoys all kinds of fictional and fantastical worlds from Tolkien to Doctor Who.  In her dearest daydreams, she is a best-selling author who takes tea with the likes of J.K. Rowling, George R.R. Martin, and Patrick Rothfuss. She aspires to accomplish the challenge of capturing on paper the feeling of falling in love. ​

​In his second year as an English major, Michael is also minoring in psychology and music. His favorite book is a tie between Star Maker by Olaf Stapledon and A Dance With Dragons by George R.R. Martin. When Michael is not at school he can be found at Blondies, in the forest with friends, the library, a party, Northtown Coffee or on a walk. Currently in his senior year with a focus in Creative Writing, he hopes to learn more about the world of publishing through the Toyon.

​From Paso Robles, Luke acted as the Special Themes Editor for the Toyon while attending HSU as an undergraduate in Writing Practices. Luke chose to join the Fall 2015 Toyon staff to help further his academic goals, as well as supplement his experience and understanding of the publishing process. He hopes continue working creatively with writing while furthering his education.  His favorite book would currently be Chuck Palahniuk’s Rant: An Oral Biography of Casey Buster, and would recommend Kurt Vonnegut’s “Slaughterhouse-Five” to aspiring authors.